Canine Body Language and Being Proactive on Preventing Aggression 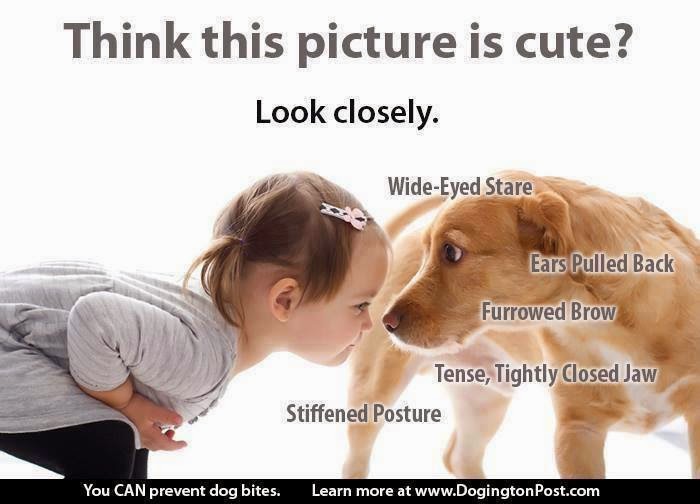 A lot of people would find this picture cute, but just seconds later, the photo could have been anything but cute. Reading canine body language could prevent your child - or anyone for that matter - from being bitten or attacked by a dog.  Once you're reactive, it's too late.

These are things that you will likely hear a child or adult say when they're distressed and want to signal to other humans when they want to be left alone.  We only act in aggression when our verbal cues are not honored.

Dogs do not have that ability to verbally communicate distress to us.  They can't walk up to you and say, "Hey, the little girl is getting in my face too much. I don't like it.  I also don't like it when she tries to take food away from me."

If your dog is doing that, then see a psychologist because who knows what else you're hearing or seeing with those hallucinations?

They don't use the same body language that you or I would use.  They can't cross their arms or pout when not happy.

When they're feeling like they need to go on the defensive, they're giving you clues that you may just not pick up on because you don't recognize them.  When you learn canine body language, you can foresee a possible ugly situation before it happens -- and keep it from becoming worse than it has to be -- if not preventing it altogether.

When you fail to see a dog's signs of being stressed or signs of aggression, you're putting the dog in a position where he or she has the mentality that, "I told you that I didn't want you to get in my face, but you wouldn't listen.  So, I had to bite you!"

You wouldn't like it if someone pushed you (even if unknowingly) to the point of acting out in aggression even if you tried to warn them.

Learning when a dog is trying to tell you this will help to prevent danger -- even a tragedy!

1. Tail wagging does NOT always mean friendly or happy.  Sometimes this indicates alertness and nervousness. It's like the equivalent of a person's nervous laughter.

2. Always ask a strange dog's owner if it's okay to pet him or her.  You just never know what trauma that dog has been through earlier in his or her life.  For instance, a rescue dog may have been abused by a grown man and may not trust all grown men.  Certain hand gestures may also make the dog think that he or she will get struck.  Check first to be safe.

3. Teach children not to look a dog in the face directly.  Some may find this threatening (some may not).  Also, they may find this annoying.

As for body language, the following pictures show postures that indicate when a dog is alert, scared/nervous, friendly, submissive, and aggressive. 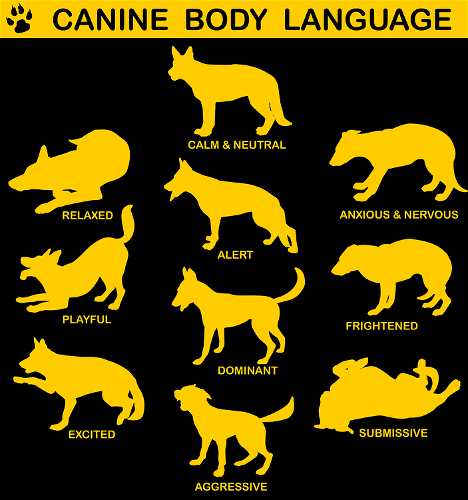 If you see posture that indicates dominant, frightened, dominant, anxious/nervous, and aggressive, use extreme caution.  Better yet, turn your head and look down to avoid further interaction.  This shows the dog submission and peacefulness.  If this is shown toward a child, intervene (without making any abrupt or quick movements to further agitate the dog).

The picture below shows similar postures as the one above, but there are also tips on what to do when you come across a strange dog.

A. STOP!
B. Bring in your arms to your body.  You'll look harmless.
C. Look at your feet and count in your head until help arrives. 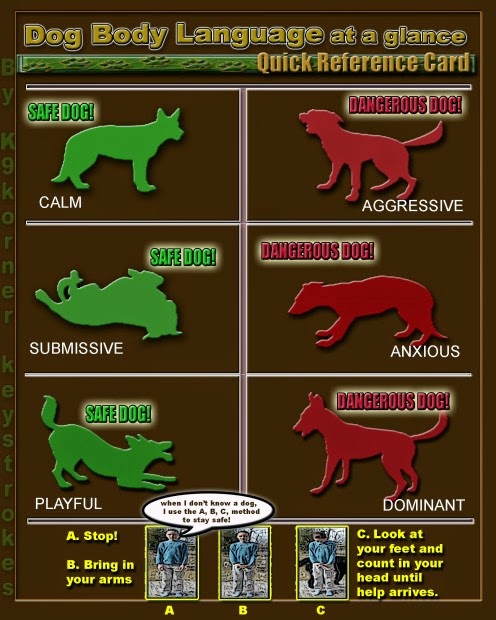 Modern Dog Magazine goes into details about these postures and what to look for specifically.

Understanding these signs and acting appropriately in a timely manner could be the difference between no problems and an attack -- especially a tragic attack.